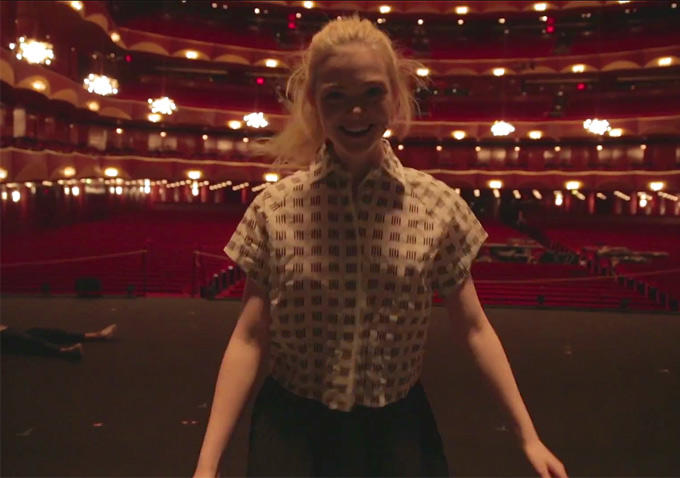 A playful performance before one camera in a quiet, empty theatre

I think people often forget the importance of being full of wonder. I think they harden, give up, lose sight of their passions, get stuck in their ways, or lose sight of what’s most important to them. I know I do. Like many others, when I feel hurt, or left to my own devices, or abandoned, or shrugged off with a noncommittal, “You’ll be okay in the end”, I tend to clam up and shrug my needs away and hide, hoping not to be too much of a bother. It’s easier, and it’s less risky. But when all is said and done, I think that letting our wounds get the best of us is a mistake. When we take the risk of being genuine, and communicate our wounds, and be imperfect, there’s so much more to gain… and to learn.

The song “Ooo” is the first of a series of delicate, lo-fidelity, intimate recordings called Crush Songs, recorded by Karen O alone, in her bedroom, and full to bursting with vulnerability, emotion, wonder and the personal risk inherent to creativity. Karen O, the frontwoman of the Yeah Yeah Yeahs and brilliant songstress behind the soundtrack of “Where the Wild Things Are,” has an unmistakable voice, and she bares her soul over the course of 15 tracks, none longer than three minutes. It’s an album I treasure, one which serves as the best possible company for quiet evenings with hot tea, a book, perhaps while wrapped in a blanket. It reminds me of the nights I used to spend playing songs at KJHK, usually delicate, lonely sad songs by the likes of Nick Drake or Joanna Newsom. And by that I mean… it’s really something special.

What makes this video so special is that it was shot during rehearsals in an empty, yawning New York Metropolitan Opera House, and focuses intently on a lone, dancing Elle Fanning. She is childlike, dancing before the camera and giggling with joy, hamming it up and playing with the cameraman like a happy ballet dancer, one whom sadness and struggle had never touched. She sings along to Karen O’s vocals, spins, leaps, romps, and lights up the stage. As for music videos, this really breaks the mold… no plot, no sign of the artist… nothing really, except one woman dancing, backed by thousands and thousands of empty seats, and at the end, the voice of Spike Jonze and company. Like many of his videos, the song is complemented impeccably, in a single take. And best of all, the video was a surprise… a gift to Karen O… produced unknown to her by friends, colleagues, and loved ones.

If there’s a thing that gives me hope, it’s captured moments like these, when people have the strength to let their guard down and be as they are… child-like and pure, publicly, and unabashedly. It’s not easy. But whatever age you are, and whatever you’ve been through, playfulness is the best true therapy. Laughing. Dancing. Crying. Not understanding. Being real. Being simple. Daring to dream. Daring to play.

If you like what you hear, be sure to check out “Crush Songs!” Definitely an album worth your while.

2 thoughts on “This “Surprise Music Video” for Ooo is simple, sweet, uncomplicated, and pure”